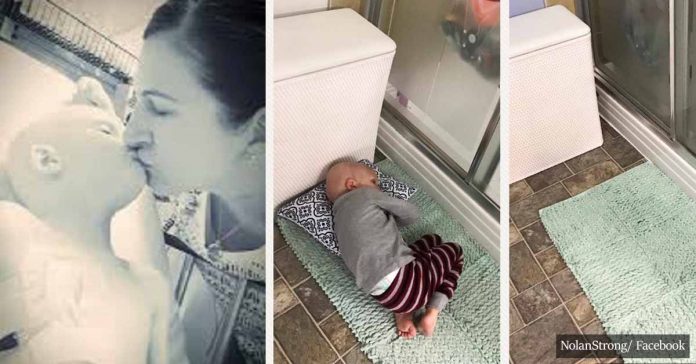 When his struggle for survival reached its end, Nolan did not dwell on the thought of death but instead emphasized his faith. Being aware that he would soon pass away, he told his mother, Ruth, he would just wait for her in Heaven.

Little Nolan Scully was diagnosed with rhabdomyosarcoma – a rate of soft tissue cancer – when he was only 3-years-old. After he was diagnosed, Nolan’s family started a Facebook page which tracked the good and the bad moments of his journey.

Little Nolan wanted to become a police officer and serve his community like his dad Jonathan, who was a firefighter. Jonathan stepped down from duty once his son’s diagnosis was made. During his hospital stay, the city’s Police Commissioner made his dream come true by swearing him in as an honorary police officer. On this extraordinary day, he became Sergeant Rollin’ Nolan.

No words can express how difficult it must have been for the family to process this news. Nolan’s mom was now gathering her strength to tell her son what is happening. Surprisingly, however, his reaction showed how pure and strong his faith truly was. Nolan showed no fear of death. He even told her he would wait for her in Heaven.

Nolan’s mother has shared one of the conversations she had with her son during the final days before his passing:

Mom: Poot, it hurts to breathe, doesn’t it?

Mom: You’re in a lot of pain aren’t you baby?

Mom: Poot, this Cancer stuff sucks. You don’t have to fight anymore.

Mom:: No Poot!! Is that what you have been doing?? Fighting for Mommy??

Nolan: To keep me SAFE! (With a big grin)

Mom: Honey … I can’t do that anymore here. The only way I can keep you safe is in Heaven. (My heart shattering)

Nolan: Sooooo I’ll just go to Heaven and play until you get there! You’ll come, right?

Mom: Absolutely!! You can’t get rid of Mommy that easy!!

Nolan: Thank you, Mommy!!! I’ll go play with Hunter and Brylee and Henry!!”

The 4-year-old and his family made the best of the little time he had left by enjoying each other’s company. Nolan loved having his mother close to him so he could see her and hold her.

On the final day of his life, Ruth was given permission to take a quick shower. A short time after she closed the bathroom door, her son shut his eyes and went into a deep sleep, beginning the end of life passing, she said.

When she came out of the shower, little Nolan was surrounded by his whole medical team. While Ruth had been in the shower, her son had slipped into a coma and his lungs had collapsed.

“I ran and jumped into bed with him and put my hand on the right side of his face. Then a miracle that I will never forget happened. My angel took a breath, opened his eyes, smiled at me and said ‘I Love You, Mommy,’ turned his head towards me at 11:54 pm Sgt. Rollin Nolan Scully passed away as I was singing ‘You are My Sunshine’ in his ear.”

When Nolan’s mother shared memories of him online, she included a side by side photograph of the bathroom floor. Little Nolan used to love laying on the bathmat outside the shower.

a lovely incredible young soul. enjoy your play with more fun than u could have imagined in your heaven. x

Meet The New Grumpy Cat That Looks Even Angrier Than Her...

This Temple Was Carved Out Of A Single Rock. No one...

Man Discovers A Family Of Mice Living In His Garden, So...

Finding The Best Bargains On Juvederm

ABOUT US
We are a professional website publishing that specializes in providing top notch contents which include: Inspiration, Motivation, New Studies, Health, Relationship, Life and Youth.
Contact us: info@auxx.me
FOLLOW US
2020 © Auxx Me Network (Private) Limited
wpDiscuz
2
0
Would love your thoughts, please comment.x
()
x
| Reply