There can be many times where you have felt like ‘this world is too weird’. There are people who do so many crazy things that are even hard to be imagined and depending on the way how you look at them, you might have felt strange or great.

However, everything is getting changed in every single second. The fashions, trends, traditions, beliefs and many things that we followed years ago, would seem meaningless and insane in your eyes now. With the changing times, our thought patterns are also getting changed and if you look back at the pictures that you took years ago, you might feel how funny you look there!

So, we thought of sharing some pictures with you which show how the world had been a few decades ago. Some of the things shown in these pictures seem incomprehensible to modern law and way of life and you might even define them to be barbaric and violent. So, scroll down to see these unusual pictures and don’t forget to share your thoughts with us.

Cocaine was not a harmful substance years ago. It was readily available on drug stores and was sold to cure coughs and toothache. It was widely advertised along with other pharmaceutical drugs and was used as a sedative for kids.

#2. Sending kids through the mail

This may seem hilarious but years ago, Americans sent their kids through the mail and it was absolutely legal. It cost only 15 cents if their kids weighed no more than a standard parcel.

In the 18th century, garden hermits were popular among rich people. A personal hermit lived me these garden hermits and they were not allowed to cut nails or hair. Owners were proud to show off their hermit in front of visitors and considered it a privilege to have a hermit at home.

Several decades ago, doctors had no clue about disinfection and they used strange methods such as bloodletting as a remedy for all diseases, tongue cutting against stammering as well as lobotomy and electric shock treatments. Famous orthopedic surgeons such as Lewis Sayre (pictured with a patient), did a lot of operations with lethal outcomes.

Radiation was considered as quite a safe thing in the 1950s and ‘atomic’ toys were given to kids as mini-laboratories. This set for experiments included real polonium and uranium in small quantities. 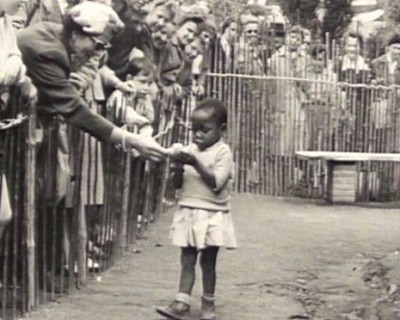 People from Asia and Africa were showed out in these human zoos as ‘proof’ of Darwin’s theory. This shameful entertainment existed for many years and the pictures show a Belgium zoon in 1958.

Patients of psychiatric hospitals were treated really bad in the past. Staff rarely fed these people even though the patient’s relatives paid for accommodations. Asylum owners created a business out of them by allowing visitors to see them and visitors were allowed to look at them or poke a small stick by giving a small amount of money to owners.

It was a hobby among people to collect body parts some time ago. Reputable gentlemen had their own pathoanatomical rooms at home and even soldiers were allowed to take home their enemy’s skull. In the picture, an American soldier is shown with the skull of a Japanese soldier during the Second World War.

#9. Smoking during pregnancy due to a doctor’s prescription. (margaretgunnng.blogspot.com)

Smoking is considered as not good for health but 70 years ago, it was recommended by American doctors to pregnant ladies in order to get rid of constipation.

Texting Nightmare: You Are Killing Your Relationship In 5 Stages

Mom Illustrates How A 2-Year-Old Can Hurt You And It’s Too...

Thai Woman Creates Hilarious Instagram Vs. Reality Collages And Here’s 20 Of The Best Ones