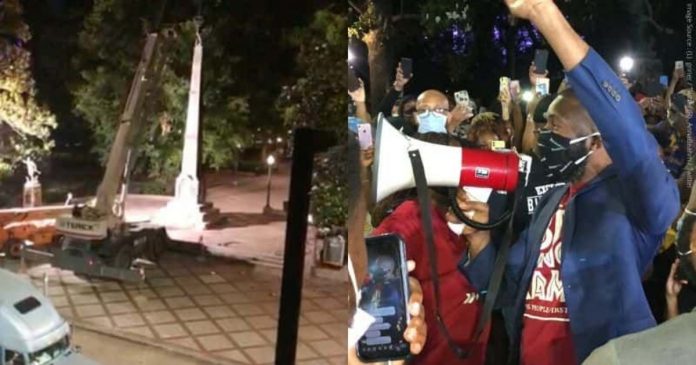 On the 1st of June, protesters for the Black Lives Matter movement in Birmingham, Alabama, got together at the Linn Park to battle the brutal murder of George Floyd, an African-American, by Derek Chauvin, a white police officer, in Minneapolis. The protesters engaged in futile attempts to take down the 115-year-old Confederate monument in the park. In order to calm down the situation, the mayor of Birmingham himself stepped up to remove the monument.

Taking down the 52-feet tall Confederate Soldiers and Sailors Monument was part of the Birmingham protest, and those who gathered at the park tried to pull it down. However, Birmingham mayor Randall Woodfin arrived at the scene and promised to take it down himself, and a crane was spotted tearing the monument to the ground 24 hours after he made the vow.

Watch the video below to see what the mayor had to say.

The protest was initially a peaceful rally, started in downtown Birmingham. After reaching the park, the protesters took down a smaller statue of Confederate sailor Charles Linn which was constructed in 2013. The mayor arrived right on time before the demonstrators could topple the larger one. Before promising to remove the statue himself, he first pleaded the protesters to disperse, fearing the arrival of the police.

Birmingham Mayor Randall Woodfin has “given his word” to protesters that this confederate monument in Linn Park will be down by noon Tuesday #Alabama https://t.co/EhBRJj2J3o

Woodfin is heard stating “Allow me to finish the job for you” in the Facebook Live footage captured by CNN.

Johnson now saying protesters should give the mayor 24 hrs to get it down. He says if it’s not down by Tuesday morning, they’ll come back at 12 noon to attempt to bring it down. pic.twitter.com/XYSX5kQ9uC

Shortly after the demonstrators returned to their original site of downtown Birmingham, riots erupted and fires and property damages to buildings were also reported. This unsettling situation persuaded the major to declare a state of emergency on Monday, with a state-wide curfew imposed until further notice.

Due to the violation of state law caused by this act, the city of Birmingham was charged with a $25,000 fine by the Supreme Court of Alabama. Regarding this, Woodfin stated: “If there’s a judgment rendered from the judge, then we should be held accountable. And I believe I am willing to accept that because that is a lower cost than civil unrest in our city.”

I want to share a bit about how to have an effective protest.

Let’s follow the lead of the giants who paved the way for us. Let’s be better. pic.twitter.com/RrPNuhrTjJ

Watch the video below to learn more.

Women Need A Tribe- Here’s Why