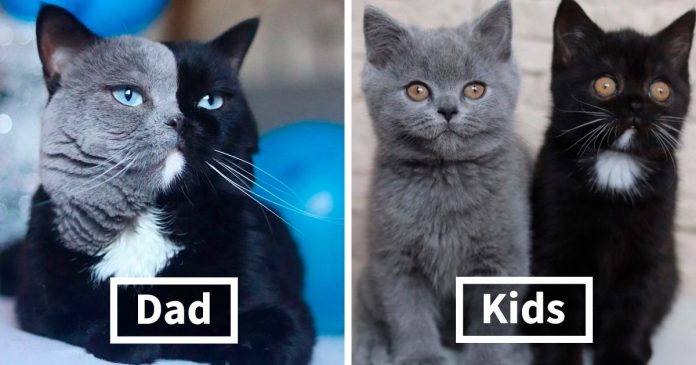 “Inheritance” is an interesting section that comes under Molecular Biology. It simply is the process by which the genetic information is passed from one generation to the other. This is why most of the time the child gets a lot of similar characteristics as his parents. Although the genes pass from one generation to the next, they undergo a lot of variations. That’s why a child does not look exactly as his or her parents.

Sometimes genetics gives unexpected and hilarious results. Narnia is a 2-year-old tom-cat. This cat is a news creator who owns an Instagram account of 243K followers. It grasped the attention for the 1st time because of its face. This blue-eyed creature has a face that is symmetrically divided into two colors that are gray and black.

Narnia was born in Paris but lives in Britain. This boy was previously thought to be a feline chimera cat, whose cells contain two types of DNA. That happens when 2 embryos fuse together. But, its owner Stephanie Jiminiez said a geneticist ran some tests and found out Narnia has only one DNA, which remains a mystery for science.

Recently, Narnia became popular again because he had two cat babies that have each taken their fur color from the 2 colors of Narnia’s face. The gray-haired sibling is Phoenix and the black-haired sibling is Prada. However, this news is very famous because of this double marvel!

21 Lessons From Lao Tzu On Life, Death, And Happiness

Bumblebee Has Officially Been Added To The Ever-Growing List Of Endangered...