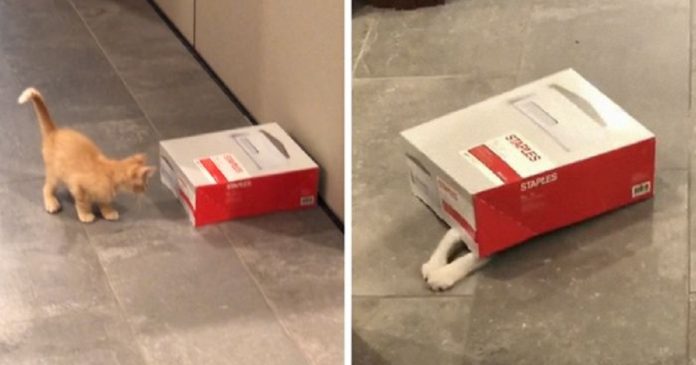 A transportation company in Ohio rescued two kittens namely Debit and Credit. Who were then hired by the IT/Finance department to boost the spirit of the office. The basic competence in an office is to be able to answer calls, work on a computer and to be able to arrange office supplies, which Debit and Credit could do- well at least almost. These adorable kittens were however hired to ease the tension around the office and boost its employee morale.

The playful precious duo were caught on camera trying to wrestle each other hiding under an empty box, which was then put up on Reddit by one of the employees, that led to people wanting to see more of the playful two. The adorable kitties were able to enchant not only the employees in the office but took the internet by storm. People couldn’t get enough of the delightful brother and sister duo. Debit and Credit have now gotten their own Instagram account with over 23k followers.

Meet Debit and Credit, the adorable ‘office kittens’ taking over the internet with their hijinx

The employee who posted the video to Reddit said the kittens stay at the office during the evening but are visited on the weekends “for snuggling and playing.”

The Video that was adored by many

According to physiologist Lotte Spijkerman, cats and dogs can physiologically benefit people in multiple ways. He says “They reduce stress and increase productivity, mainly because they interact with you of their own accord and, when they pop over to your work station, it’s a good reminder that you might need to take a break.” Having animals in offices have been increasingly trending over the past few years.

While having pets can be fun there are some logistics to be such as how to handle individuals with allergies (about 30% of the American population). In the case of this company, the employee on Reddit said, “My building is small—there are only 6 of us. One of them is allergic, but she doesn’t care. The others stay in another building.”

Every Empath Will Try To Hide These 11 Things From You

This Nursing Home Opens Its Doors For Kids To Trick Or...

Why Taking Care Of A Pet Is The Best Form Of...