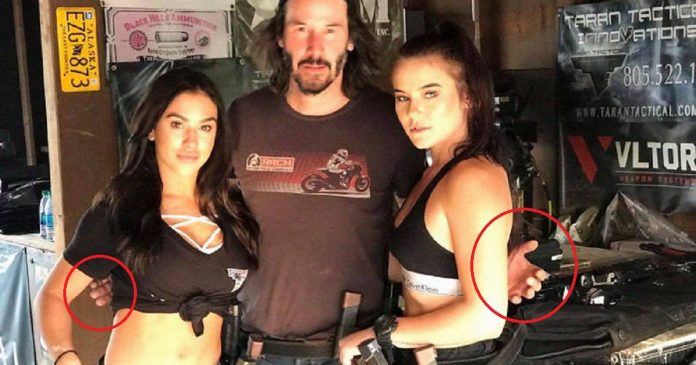 People can easily become famous all over the world by doing many things. If you can win a reality show, write a book or do something extraordinary, people will talk about you for years and will love you or hate you depending on the thing that you have done. However, there is no need to tell that among all the famous people, actors and actresses are the ones who stand in first. Many people are really in love with them and would do anything even to have a picture with them!

So, if you are someone who loves actors and actresses, you would know what a picture with them would mean to you. when we get a chance to have a photograph with our favorite actor, we would like to stand as much as close to them and the best thing is that many of these famous people also don’t mind that. They might even hug or kiss us, will keep their hands on us and even though some of us like such intimacy, there are people who also feel uncomfortable with that.

Keanu Reeves is a world-famous actor who has won the heart of a number of fans around the world and we all are really lucky to have him. He is not a person who runs after fame and most of his charities and other social works are conducted in secrecy. Most of his earnings from the blockbuster trilogy TheMatrix was given to the special effects and costume designer team of the movie a he felt they were the real heroes of the movie. His life has been comprised with both happy and events and the star is now known as a recluse who try to stay away from media and social attention.

Recently, one of his fans noticed something special about him and it soon went viral on the internet. The fan noted that whenever Keanu is posing for a picture with a woman, he doesn’t touch them any time!

No matter whether he is posing with a co-star or an ordinary person, he has never attempted to touch them and many people wonder the reason behind his hover hands.

So, what do you think about Keanu’s this action? Let us know your thoughts in the comments.

Because his dick will erect

A Blessing In Disguise- A Pill For A Delightful Fart!

The National Geographic’s Travel Photo Contest Is Over And Here Are...