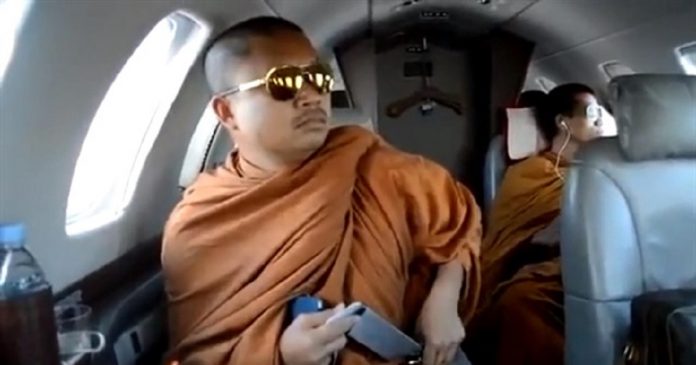 As it’s the case everywhere, great teaching like Buddhism is no exception to some of the selfish individuals becoming monks and forgets practicing what Lord Buddha taught. Those who are supposed to set an example themselves setting bad example only will frustrate the Buddhists who wish to see Buddhist monks setting a good example to the lament people.

Sangha is just a part of Buddhism and Buddhism is all about dharma that helps people to attain nirvana ending grieve & suffer. However, the Sangha (Monks) are responsible to make people realize the truth and guide them to enlightenment.  Therefore, the following story comes as a shock to many Thailand Buddhists making them lodging hundreds of complaints to the respective body looks after concerns similar to this. Our objective of sharing this is that as Dhamma loving community we should be aware of the accepted and unaccepted behavior of false monks or those who pretend as monks to disrepute the great Buddhism. It is also our responsibility to stand against such behaviors of monks as we are the protectors of pure Buddhism that praise a simplistic life that helps to realize the noble truths of life. Read the story of the guardian as follows and understand why it is wrong to live a life in contrarily to Lord Buddha’s teachings.

National Buddhism body has announced it is monitoring monks for any inappropriate behavior following complaints prompted by a video showing Buddhist monks flying on a private jet.

The YouTube video that emerged recently showed one of the monks wearing stylish aviator sunglasses, carrying a luxury brand travel bag and sporting a pair of modern wireless headphones. It attracted criticism from Buddhists nationwide.

The director-general of the National Office of Buddhism, Nopparat Benjawatananun, said on Monday that the agency had warned the monks from a monastery in Thailand’s north-east not to repeat the lavish behavior seen in the video.

A country with the world’s largest Buddhist population, Thailand has attempted to help Buddha’s 2,600-year-old doctrine stand the test of time through a variety of means, including imposing a ban on the sale of alcohol on religious holidays. However last year alone there were many cases of misbehavior by some monks that resulted some of them being de robed most justly. The agency also received complaints about monks driving cars, as well as scams and false claims of black magic by monks.

Nopparat said the monks in the video were acting “inappropriately, not composed and not adhering to Buddha’s teachings of simplicity and self-restraint”.

Unbelievable Snowy Covering In Arizona Desert And The Photos Are Beautiful

Michelle Obama Was Declared The Most Admired Woman In The World