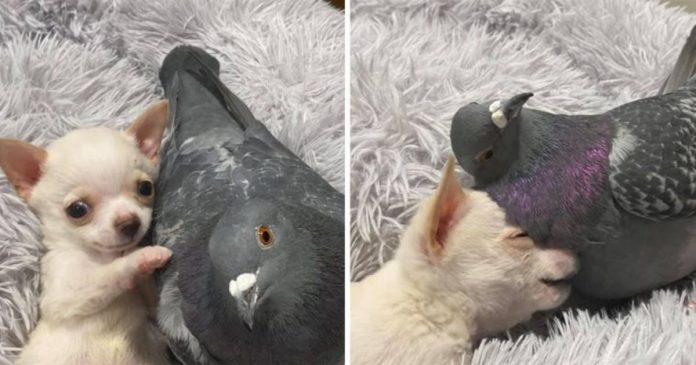 An unexpected attachment between a pup and a pigeon is captivating hearts around the globe!

Lundy, a 2-month-old Chihuahua puppy who cannot walk, and Herman, a wild pigeon unable to fly, have become inseparable snuggle buddies. These cuties encountered each other at The Mia Foundation, a nonprofit organization in New York which specializes in helping incapacitated animals. Lundy’s rear legs are immobilized due to an inborn dysfunction called Hydrocephalus, and Herman was brought to the Mia Foundation one year ago after a severe wounding.

Regarding this endearing friendship, Sue Rogers, founder of the Mia Foundation explained: “I set Herman on a dog bed and started caring for Lundy, and I decided to carefully put Lundy in the same dog bed next to him. They looked so adorable that I snapped a few photos.”

From that day onward, the two have been glued to themselves, cuddling on their best-loved blanket most of the time.

When The Mia Foundation shared a video of their snuggles on Facebook, it went viral immediately. While the comment section overflowed with love, positivity and anticipation for the duo, the video has gained over 5.3K likes on Facebook since February 15. Not only that, but the Mia Foundation also received hundreds of messages of support and contributions from around the globe, and over 100 people have offered to adopt both Lundy and Herman.

When asked about the reason people are so in love with this pair, Rogers told Rochester NBC affiliate WHEC-TV: “I think the world is in the need of good stories and when you have two species that basically fall in love, it can only touch hearts.”