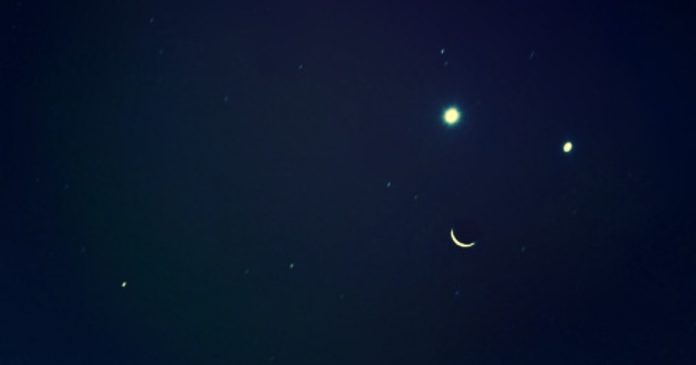 It has been reported by astronomers that on May 16th, 2020 a rare celestial phenomenon is to take place in some parts of the Earth’s sky in certain continents. Where you will be able to see the alignment of three worlds in the evening sky. One is the moon, which a thin crescent upturned like a smile. The second is Jupiter, the gas giant reduced by distance to a really bright dot. And the third will be Venus, shining like a really bright headlight in the dark.

Legend has it that in biblical terms, a similar but closer pairing may have been mistaken for the Christmas star by the three wise men who were seeking the birth of Jesus Christ.

This rare celestial phenomenon has occurred a number of times in recent history. But what makes it even rarer is that it is hard to be spotted in the night sky and the way they align to display a smiley face in the sky which is much needed right now with the current situation happen globally. But even though some may see this alignment as a smiley face like the emoji we use on our phones, some may see a sad smiley face or even a frown. This rare celestial event is known as an occultation. An occultation happens when one object passes in front of another from an observer’s perspective. Some examples are solar eclipse, lunar eclipse, asteroid occultations, planetary occultations, and artificial occultations. Conjunction takes place when planets align in the sky. But as mentioned before, only certain parts of the world will be able to see this rare and notable event in their evening skies.

The align of the Moon, Venus, and Jupiter has been a witness before in recent years in parts of the Earth. Back in 2007 this, as they call it ‘the smiley face align by the Moon, Venus, and Jupiter, was visible in the skies of Asia. Then again in December 2008, it was visible from Australia and again in 2012 throughout North America. And now again in 2020. Especially in relation to astronomy, it is a rather common phenomenon. Conjunctions usually occur on a regular basis, but often are not as obvious as the planets are farther away.

When we take a look at certain images taken by people of this event in those years, it is extremely easy to say that it is a smiley face. This is known as “Pareidolia” which means seeing meaningful images from or in random data that some do not see. This is a rather common and often situation that has an impact on astronomy.

This celestial event is usually not usual for the moon to appear to pass close to Venus as it happens at least once a month. However the occurrence of this event

Warm Coffee With A Furry Friend! What More Could You Ask...

The More Time You Spend With Your Mother, The Longer She...