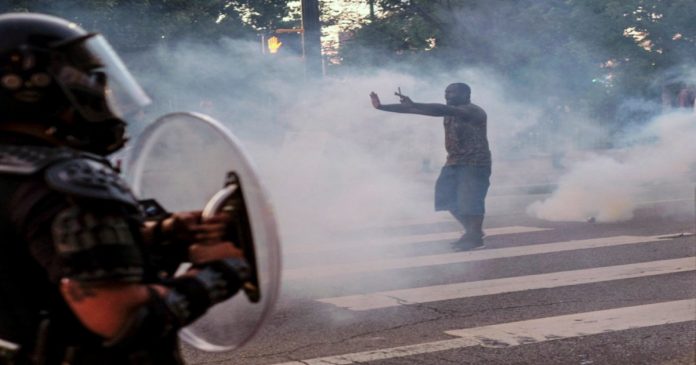 “The black lives matter” movement was founded in 2013 as a social media hashtag. Lately, it became a protest movement after clearing George Zimmerman in the shooting death of Trayvon Martin, an African American lad.

Recently, this movement became highly active with a mighty phase after the assassination of George Floyd by a white police officer. The majority of the people voiced solidarity with the George Floyd protests. This is not only helpful but also revolutionary.

But unfortunately, not all the people get the chance to join the untroubled crowds and blend their voices along with the other supporters. There are some people from all across the country who want to assist the movement, but they are alone and helpless.

The best thing is, they didn’t change their minds of supporting the movement. They stood up alone without anyone to back them up and those silent actions went viral on social media and grasped huge attention from all over the world.

#16 A Sole Protester In Front Of Anaheim City Hall

There was a sole protester already in front of Anaheim City Hall.

One organized protest is expected to take place there at 5 p.m. while another is expected to be held at nearby La Palma Park at 4 p.m. pic.twitter.com/9TydRmZzJP

It’s not much of a protest, but it’s the best I can do right now. Sitting outside past “curfew”. from r/pics

Was driving through Enterprise Alabama yesterday and spotted this lone protester at the City Hall. from r/pics

#13 My Husband Is Standing Alone

My husband, doing the same. pic.twitter.com/BInewpUWYP

#12 Shoutout To This Guy

Shout to to this guy for somehow getting the cops called on him for his one man protest (credit tiktok user shanemeyers1) pic.twitter.com/yJWmbrOAyk

#11 She’s Truly The Definition Of Standing Up

Ms. Leta must be protected at all costs. She’s truly the definition of standing up for what is right even if you’re standing alone ❤️https://t.co/OTndwEXDNh

#10 Outside Of The Norfolk Va Pd

Outside of the Norfolk VA PD today. from r/pics

#9 Risking His Life To Protest

West Palm Beach, Florida Sherrifs shut
down I-95 today in preparation for the
peaceful protest and this dude ran all
the way ahead and stood alone…#blm pic.twitter.com/hrNTlisw4g

We had one guy in our town start a protest yesterday too. pic.twitter.com/vZzVMTs1oc

#blacklivesmatter lone protester in Lacey – Marvin Road – #BLM – what a powerful lone protester today! It’s good to see this out in the rural community too. from r/olympia

This man has been standing alone in our town square for the past few days, gods bless his courage from r/pics

#5 A Sole Protester In A Small Town At Washington

Ocean Shores, Washington, in the middle of the small town traffic circle. No voice is too small. from r/pics

Let us all hope we don’t need to have a sign like this when we are his age. from r/pics

A lone protester in the heart of a small southern city. Thank you. from r/pics

#2 Karens Against The Police Brutality

The Karens doing their part to stop the violence! from r/pics

#1 Mindset is the most important thing

My mom did her own march since none of her friends wanted to join her ❤️ pic.twitter.com/ErL9NUyeoe

How To Choose Mattress For Sex?