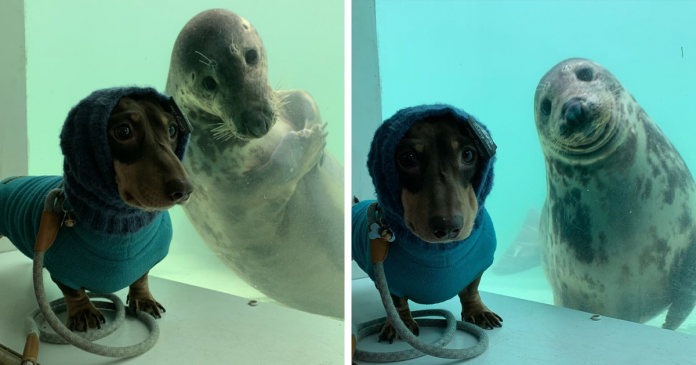 The urge to make new friends is not something that is exclusive only to humans, it also works the same way on animals as well. And this beautiful spark of friendship lighted between a pupper by the name of Stanley who recently went on vacation to Cornwall with his human to visit the local Cornish seal sanctuary where he met with a seal pup named Aayla.

Stanley is a dachshund also know as sausage dog, was on vacation with his human friend, Melanie Talbot. They were in Cornwall, England to spend some quality time together. And they decided to visit the Sea Life Trust Cornish Seal Sanctuary.

Stanley and Aayla, the land pup and the sea pup, recently became friends at the Cornish Seal Sanctuary.

Aayla, a permanent resident of the seal sanctuary. When Stanley entered the underwater viewing area, Aayla grabbed his attention. And both were excited to meet each, while Stanley was astoundingly glancing Aayla was swimming around inquisitively looking at the sausage dog.

Thereafter, the two new friends spent a good 20 minutes interacting with each other and posing for photos. Making everyone around then go “aww..”

It was assumed that Aayla mistook Stanley for another seal Because of the doggy jacket and a snoot with his ears tucked up inside which made her ponder that Stanley was one her kind. Having said that, Aayla began mimicking certain behaviors like waving at the doggo and tilting her head as most dogs do.

They took pictures together in which Aayla looked more like a dog than a seal. Talbot said that it was felt as if they were friends at first sight.

The owner also pointed out that someone told her pup to tend to sleep with their legs tucked in, making him look like his seal friend. And of course, it’s friendship at first sight for these two adorable pups.

The Sea Life Trust Cornish Seal Sanctuary in Gweek, Cornwall is a home for sick, injured, or distressed seals as well as other marine animals. They rescue and provides care for the helpless marine animals. Also, If the animals are fully recovered they set them free, but in case if the animals aren’t fully recovered they are given permanent residency in the sanctuary itself. Aayla is one of many animals that have been rescued and given a new home here.

You can find out more of Stanley’s cuteness on Talbot’s Instagram and more seal aquatic animal cuteness on the Cornish Seal Sanctuary’s official Instagram account.
What are some of your holiday friendships? Let us know in the comments below!

22 Annoying Things That Can Create Anyone Throw A Tantrum

This Is The Secret Behind The Failure Of Your Relationship