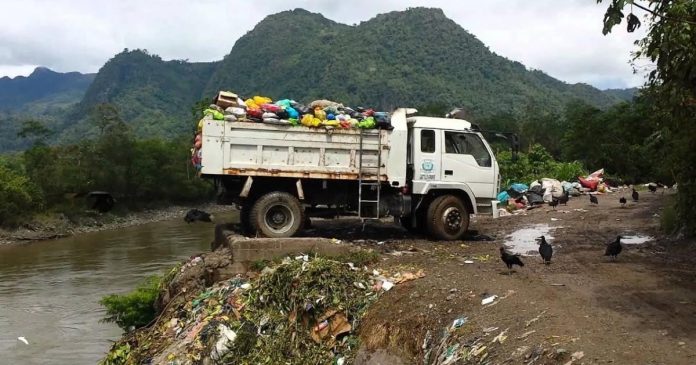 After careful review, we came across evidence which led us to believe, that the story “Truck Filmed Dumping Waste To The Amazon River” has many loopholes and does not represent the 100% truth.

The sources of the video clips are dated December 26, and October 2019. But when we checked the YouTube link we saw that its content was uploaded to that network in 2015.

A reverse search on Google, we discovered another 2017 publication on river pollution in general, which uses a video capture as an illustration. According to the caption, the river that receives the waste load is Huallaga, in Peru, not the Amazon River. In addition, he gives credit to Wikimedia Commons.

In this image bank, the photo appears with the coordinates where it was taken. The description indicates that it is near Tingo María, a Peruvian city of about 50,000 inhabitants and the capital of the Leoncio Prado province, in the center of the country. When you check the exact location on the Google Maps satellite view, the riverbank looks without vegetation and with what appears to be, instead, the same garbage mounds that appear in the video.

The Huallaga River, in fact, is the one that passes through there. However, its waters go to the Marañón River, more than 800 kilometers below, which in turn forms the Amazon by joining with the Ucayali another 350 kilometers later.

The Ombudsman of Peru asked the city to close the La Muyuna garbage dump, which has remained in that place since April 2018. The Ministry of Environment signed an agreement with the Mayor’s Office a year later for that purpose and opened a tender last August to build a temporary solid waste cell in the area to make it possible to close the dumpsite no later than last December.

On the 27th of December 2019, we published an article that showed horrifying pictures of a garbage truck dumping waste to a river under the tag “Truck Filmed Dumping Waste To The Amazon River, And People Are Mad!”. Subsequently, we received facts that proved the article was not accurate and we have republished this stating out the real story behind the footage. We at Auxx editorial team would like to take this opportunity to apologize to our readers for any inconvenience caused.

This ‘Dilation Chart’ Benefits People To Understand That Giving Birth Is...